Glass ceramics were first developed by Corning Glass Works in the late 1950s. Over time, manufacturers started adding filler particles to the base glass composition to improve mechanical properties, such as strength and thermal expansion and contraction behavior. Crystalline filler particles can be added mechanically to the glass, for example by mixing together crystalline and glass powders before firing. In a more recent approach, the filler particles are grown inside the glass object after the object has been formed. After forming, the glass object is given a special heat treatment causing the precipitation and growth of crystallites within the glass. Because these fillers are derived chemically from atoms of the glass itself, it stands to reason that the composition of the remaining glass is altered as well during this process.

In order to extend the use of resin-bonded ceramic restorations and possibly use them for bridge construction, a glass ceramic based on lithium disilicate system was developed and introduced into the market in 1998 (Empress II, Ivoclar Vivadent). To increase the strength, thermal expansion and contraction behavior of ceramics, manufacturers have added crystalline filler particles. The crystalline phase that forms is a lithium disilicate (Li2Si2O5) and makes up about 70% of the volume of the glass ceramic. Lithium disilicate has an unusual microstructure, in that it consists of many small interlocking plate-like crystals that are randomly oriented. This is ideal from the point of view of strength because the needle-like crystals cause cracks to deflect, branch or blunt; thus, the propagation of cracks through this material is arrested by the lithium disilicate crystals, providing a substantial increase in the flexural strength.

IPS e.max Press (Ivoclar Vivadent) was introduced in 2005 as an improved press-ceramic material compared to IPS Empress 2. It also consists of a lithium disilicate pressed glass ceramic, but its physical properties and translucency are improved through a different firing process. Lithium disilicate dental ceramics is classified as a glass ceramic, subgroup of particle-filled glass, and contained approximately 70% of crystalline lithium disilicate filler. This material comes in two different forms, an ingot used for pressable crown fabrication following the lost wax technique and a block that can be milled in a CAD/CAM system.

(a) Pressable (b) Millable
[Fig. 2] Microstructure of lithium disilicate

With the advent of digital dentistry and advances in computer aided design and manufacturing methods, the material comes prepared in “blue state”, where it is composed primarily of lithium meta-silicate, which is easier to mill and results in lower bur wear. After the milling process is completed, the material is heat treated and glazed in one step, forming the final lithium disilicate restoration.

Once milling has been completed the restoration is subjected to a second round of heat treating. The manufacturer considers the material fully crystallized after being tempered at 850℃ for 20~25min under a vacuum (Fig. 3). After the restoration has been heat treated, the microstructure has been characterized as highly-interlaced lithium disilicate crystals 5 mm long with a diameter of 0.8 μm (Fig. 2b). Due to its esthetic nature, impressive mechanical properties and ease of use, blue block has seen increasing use over the several years.

The strength of lithium disilicate, and most ceramics, comes from the bonding of the material to the tooth. Monolithic lithium disilicate crowns have been able to withstand chewing stimulation loading of up to 2500N before bulk fracture. Thinner and veneered anatomical crowns have achieved similar failure loads as that of metal-ceramic crowns. The material exhibits the flexural strength of 360 ~ 400 MPa and fracture toughness at 2.0~3.0 MPa·m1/2. The shear bond strength is 22.32±3.45 MPa. (Table. 1) Restorations whose occlusal surfaces are comprised of ceramic are subject to wear, similar to natural enamel.

Finishing the ceramic surfaces is essential to minimize antagonist abrasion, particularly in conjunction with milled restorations. To reduce the wear of enamel antagonists, ceramic surfaces should be finished according to the manufacturer’s directions even if the crown will be glazed later on. Glazing alone is not always an equivalent substitute for reworking the surfaces with fine diamonds or polishing of the basic material, because the underlying material will increasingly work on the antagonist either from the beginning or after some wear time. In terms of wear, there is a general consensus in the literature that lithium disilicate material shows a lower rate of wear than other ceramics and cause less wear to opposing structures when wear tests have been conducted in-vitro. 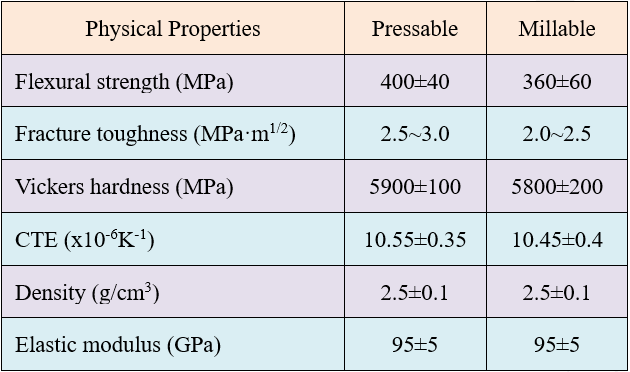 A fatigue studies found that 1mm thickness of material recommended by manufacturer might be exposed to a possible risk of complications when utilizing such a thin restoration. Also cyclic loading of monolithic veneers were highly susceptible to early failure rate. Some studies have reported that lithium disilicate crowns performed better than zirconia with fatigue testing.

The manufacturer and some studies have released recommendations and clinical guidelines to consider when utilizing the material. Initially lithium disilicate was recommended for use as an esthetic framework, an inlay and onlay material, as an anterior veneering material. In2016, the manufacturer released updated list of indications that lithium disilicate could be used as a veneering material, for inlays and onlays, full crowns, three-unit bridges for anterior and posterior region. However, some studies reported monolithic 3-unit bridge and 3-unit framework with veneering in posterior region were susceptible to failure at connectors.

Higher translucency will let more light into the restoration and if used in conjunction with a clear cement. In comparison with lithium disilicate and zirconia, the most translucent zirconia is about 70% as translucent as conventional lithium disilicate with same thickness. However, higher translucency is not always desirable. There are instances were ceramic materials with lower translucency are beneficial. Discolored teeth or teeth restored with grayish metal posts and cores require a ceramic material that can mask the underlying discoloration or metal core material. Relative opacity of zirconia is advantageous when masking is desired, but lithium disilicate has the potential to produce similar results when using medium opacity and high opacity material with veneering technique.

With regards to longevity, there are few published reviews as yet. However, clinical studies have shown to be promising. Gehrt et al. conducted a prospective study to evaluate the clinical outcome of anterior and posterior crowns made of a lithium disilicate glass. Observation time ranged from 34 ~ 109.7 months, with a mean observation time of 79.5 months. The cumulative survival rate according to Kaplan-Meier was 97.4 % after 5 years and 94.8 % after 8 years.

For lithium disilicate restorations, bonding with resin-based cement is recommended. The material is readily etchable and bonding the restoration to the supporting tooth structure will increase the strength of the crown.

When choosing material of restoration, the properties of material should be considered for esthetic and functional prostheses. Because we do not have the perfect material that can be applied universally to all clinical situations, knowledge and clinical judgment must guide the clinician in the choice of material. The different results are often derived with same material in clinical situations.

Based on the recommendations of manufacturer, studies and experimental results, the indications related to material properties are shown in Table. 2. 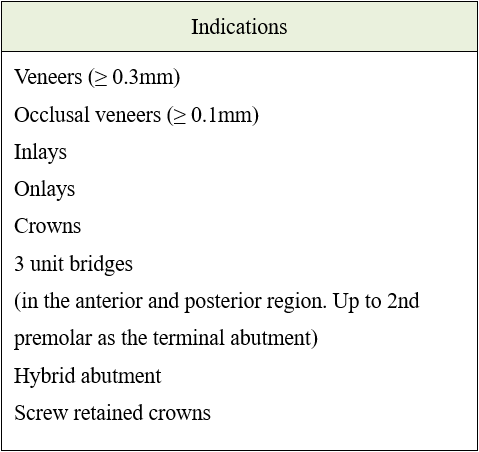 Some in vitro studies have produced results that call into question the use of the material in layered posterior multi-unit FPDs and veneers that could experience heavy occlusal forces. Millable lithium disilicate provides a unique opportunity to researchers and clinicians alike. With its growing clinical presence, this material will certainly continue to be a point of interest in the fields of restorative dentistry and materials science.