Applications of PEEK in Dentistry

Polyetheretherketone (PEEK) is a synthetic, tooth colored polymeric material that has been used as a biomaterial in orthopedics for many years. The monomer unit of etheretherketone monomer (Fig. 1) polymerizes via step-growth dialkylation reaction of bis-phenolates to form Polyetheretherketone. PEEK can modified either by the addition of functionalized monomers (pre-polymerization) or post-polymerization modifications by chemical processes such as sulphonation, amination and nitration. The titanium and its alloys have elastic modulus significantly higher than bone and resulting in severe stress-shielding and failure.

In 1978, it was developed by a group of English scientists. Later PEEK was commercialized for industrial applications. By the late 1990s, PEEK became an important high-performance thermoplastic candidate for replacing metal implant components.

The major beneficial property for orthopedics implant application remains its lower Young’s (elastic) modulus (3 ~ 4 GPa) being close to human bone. PEEK can be modified easily by incorporation of other materials. For example; incorporation of carbon fibers can increase the elastic modulus up to 18 GPa. The titanium and its alloys have elastic modulus significantly higher than bone and resulting in severe stress-shielding and failure. Due to the gradient difference in the elastic modulus of a titanium implant to its surrounding bone, it may cause stress in the implant-bone interface during load transfer resulting in peri-implant bone loss. This phenomenon is referred to as stress shielding and it may be one of the important causes of long term failure of dental implants. The modulus of carbon-reinforced PEEK is also comparable to those of cortical bone and dentin so the polymer could exhibit lesser stress shielding when compared to titanium which used as an implant material. (Table 1) Moreover, tensile properties of PEEK are also analogous to those of bone, enamel and dentin, making it a suitable restorative material as far as the mechanical properties are concerned. 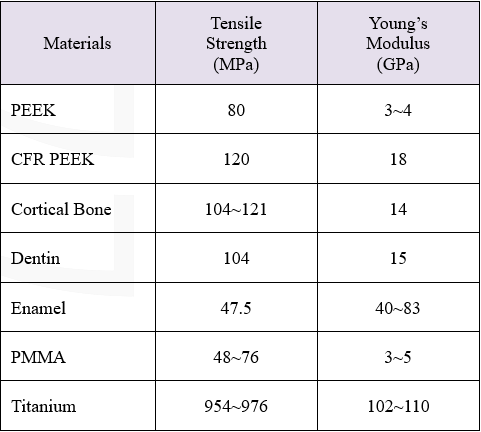 Comparing to the metals used in dentistry, PEEK is more aesthetic, stable, biocompatible, lighter and has reduced degree of discoloration. This makes it more attractive to patients with high aesthetic requirements. However, due to its grayish-brown color, PEEK is not suitable for monolithic aesthetic restorations of anterior teeth.

PEEK is a high temperature thermoplastic, semi-crystalline material with high melting temperature. Being radiolucent, PEEK has reduced magnetic resonance imaging artifacts and is very rigid with a flexural strength of 140~170 MPa. Another great advantage of PEEK is that it does not attrite the opposing natural teeth. Its biocompatibility and bio-stability are supported by the US FDA Drug & Device Master files. The modified form of PEEK is more advantageous for being anti-allergic in nature, nonmetallic in taste, excellent polishing properties, low plaque affinity, and good wear resistance. It can also be used as an alternative RPD framework material when mixed with regular acrylic denture teeth and denture base material. PEEK with its low specific weight can be used to construct very lightweight prosthesis which will provide high patient satisfaction and comfort.

Due to the grayish-brown color of PEEK, it’s not suitable for monolithic aesthetic restorations on anterior teeth. Hence more aesthetic material like composite should be used as a coating to get an aesthetic result. Many surface conditioning methods of PEEK to improve bonding with resin composite crowns has been suggested. Abraded PEEK surface with 50 micron alumina particles at 0.2~0.35 MPa followed by etching lead to the highest tensile bond strength. These literatures confirm that resin composites can be used as a covering material of the PEEK frames.

A variety of procedures have been suggested for the surface treatment of PEEK in order to facilitate its bonding with crowns. Etching with sulphuric acid creates a rough and chemically altered surface which enables it to bond more effectively with hydrophobic resin composites (shear bond strength: 19.0 ± 3.4 MPa) It has been observed that etching with sulfuric acid for 60–90 s can exhibit shear bond strength to resin composite cements as high as 15.3 ± 7.2 MPa after being stored in water for 28 days at 37 8C. Etching with piranha acid and using a bonding agent have been shown to produce tensile bond strength to composite resin as high as 23.4 ± 9.9 MPa in aged PEEK specimens. No significant differences were observed in the tensile bond strength of PEEK crowns and dentin abutments using air abrasion and sulfuring acid etching techniques. These studies suggest that PEEK can be used under resin composite as a coping material. Because the mechanical properties of PEEK are similar to those of dentin and enamel, PEEK could have an advantage over alloy and ceramic restorations.

Considering adequate biocompatibility, implant healing abutments can be constructed using PEEK. A randomized, controlled clinical trial conducted by Koutouzis et al. suggested that there is no significant difference in the bone resorption and soft tissue inflammation around PEEK and titanium abutments. Furthermore, the oral microbial flora attachment to PEEK abutments is comparable to those made of titanium, zirconia and PMMA. A close match of elastic moduli of bone and PEEK surface reduces the stress shielding effects and encourage bone remodeling. Hence, PEEK could prove to be a viable alternative to titanium in constructing implant abutments.

Dentures can be constructed by using PEEK computer-aided design and computer-aided manufacture systems. Tannous et al. have suggested that denture clasps made of PEEK have lower retentive forces compared to cobalt–chromium (Co–Cr) clasps. However, since the study was conducted on metal crowns in vitro, it is not known how effective the esthetic PEEK clasps would be in retaining dentures in the clinical setting. PEEK RPD framework eliminates metallic taste and allergic reactions, can be well polished and have low plaque affinity. Another application of PEEK is the construction of a removable obturator. Nevertheless, more studies are needed to evaluate the efficacy of PEEK obturators compared to conventional acrylic prostheses. To date, no clinical studies or systematic reviews focusing on the use of PEEK dentures have been published. However, owing to the superior mechanical and biological properties of PEEK, it will not be surprising if dentures constructed from the polymer are routinely constructed in near future.

According to Wolff’s Law, the bone remodels according to the load that has been applied to it. Stress shielding is the reduction in volume of the bone around an implant due to the shielding of normal loads by the implant. Finite element analysis (FEA) of carbon-fiber reinforced PEEK implants suggested that they could induce lesser stress shielding than titanium. However, since PEEK dental implants have not been used widely clinically, it is unknown if there is a difference between the bone resorption around PEEK and titanium implants in human subjects. Moreover, a more recent FEA study by Sarot et al. suggests there is no difference between the stress distribution around PEEK and titanium dental implants. Indeed, more clinical trials are vital to conclude whether or not PEEK implants produce lesser stress-shielding than titanium implants.

Unmodified PEEK is inherently hydrophobic in nature, with a water-contact angle of 80~90° and bioinert. Indeed, studies have shown that there is no significant effect of unmodified PEEK on the proliferation rate of cells in vitro. On the contrary, some studies have observed an increased protein turnover in cells in contact with conventional and CFR-PEEK. Animal studies have suggested that PEEK can survive for up to 3 years while inducing non-remarkable localized inflammation. Nevertheless, quite a few studies suggested that there is no significant difference between the osseointegration of PEEK and conventional implant materials such as zirconia and titanium. Conversely, recent proteomic studies have indicated that PEEK inhibits mRNA processing that may lead to a decreased cellular proliferation rate on the surface and cytotoxic effects may be produced in the long-term. Nonetheless, the same proteomic studies have found no difference between the bioinertness of PEEK, zirconia and titanium. Although unmodified PEEK, is considered as a bioinert material however, there has been no conclusive evidence of osseoconductive effects of PEEK in vivo and in vitro. Hence, in its unmodified form, the long term survival rate of PEEK implants is questionable.

In order to improve the mechanical and biological properties, a number of modifications have been attempted in PEEK materials. However, PEEK dental implants have not been extensively used clinically and there is insufficient data to deduce their long-term efficacy in human bodies.

PEEK is a modern material attracting interest for use in dentistry. Because of its mechanical and physical properties being similar to bone and dentin, PEEK can be used for a number of applications in dentistry including dental implants. PEEK with its low specific weight can be used to construct very lightweight prosthesis which will provide high patient satisfaction and comfort. Increasing the bioactivity of PEEK dental implants without affecting their mechanical properties is a major challenge.

PEEK is also an attractive material for producing CAD-CAM fixed and removable prosthesis due to its superior mechanical properties compared to materials such as acrylic. Though the PEEK is already being used as forerunner material in the spine and orthopedic, the usage of PEEK polymer material in dental practice it has yet to gain momentum. This may be because of the very few long term clinical studies available on the usage of PEEK in the clinical dental practice. Hence, further research and clinical trials are required to explore this material and possible modifications for further dental applications.