Digital Complete Denture: Where We Are and What’s Next

According to the American Dental Association in 2014, more than one third of Americans did not visit a dentist at all in the past year. Infrequent or inconsistent dental health care puts patients at risk of tooth loss due to advanced caries or periodontal disease. Unfortunately, despite improvements in dental technology and science, the total number of patients who are becoming edentulous has not decreased in recent years. According to prospective studies in the United States, the number of patients who are fully edentulous in one or both jaws will continue to increase, from 33.6 million in 1991 to almost 38 million by 2020. With an aging population, treating large numbers of edentulous patients is a challenge. One of the treatment options for these patients is complete dentures.

However, the conventional methods of manufacturing dentures have not changed in the past 50 years. The process typically involves multiple clinical appointments and lengthy laboratory schedules, and each of the involved steps requires considerable time and material. Therefore, the whole process is subject to human processing errors, inaccuracies, and further increased time and cost. 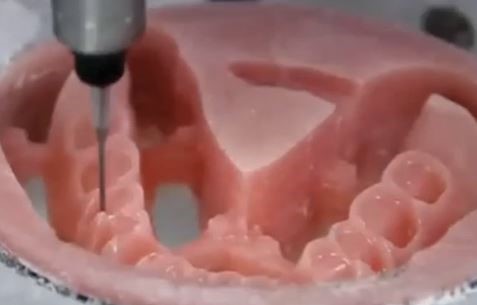 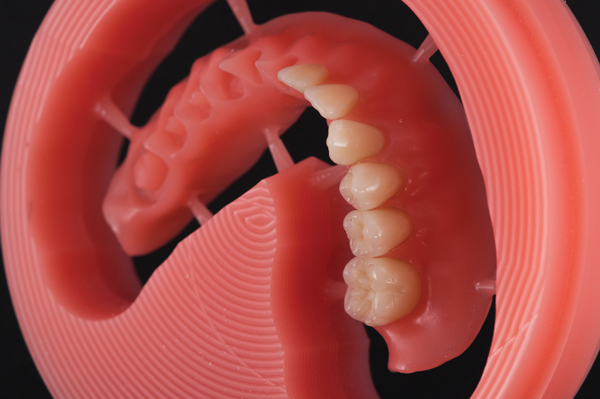 Intraoral scans allow the development of a mucostatic impression of the edentulous arch, especially beneficial with sharp, thin, flat, or flabby residual ridges. According to the mucostatic concept, denture retention is not achieved by the peripheral seal but depends on surface tension created by the intimate contact of the denture base with underlying tissues. Consequently, border molding is not mandatory and the precise definition of vestibular depth and width is not as stringent as with the functional impression technique. This might permit shorter denture flanges without affecting retention. Excessive underextension of the denture flanges is not desirable because it may reduce secondary retention and stability and impair lip and cheek support.

Intraoral scan needs a U shaped retractor (fig. 1) to retract and stabilize buccal mobile tissues, avoiding their overextension. Some clinical cases introduced the stretching of the mucosa with the finger, while performing the intraoral scan, may be useful to capture sufficient amount of mucosa reflections and achieve a good peripheral seal. However, major concern here may be the excessive displacement of the tissue and neglecting of the functional movements. 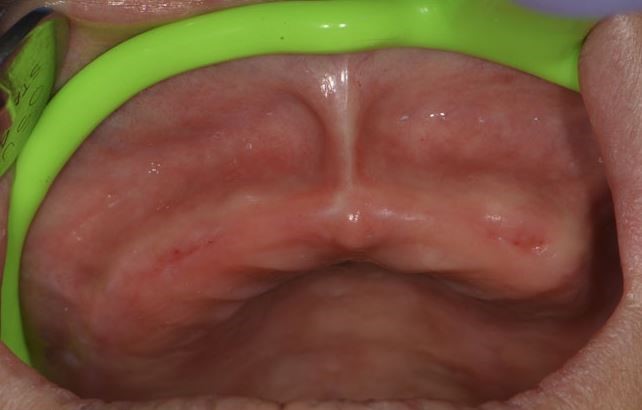 Scanning edentulous jaws has not been recommended because of problems in obtaining accurate scans of soft tissues, especially in edentulous lower arch with severe tissue resorption. Conventional impressions of edentulous arch have been reported to have significantly greater precision and trueness than digital scans. However, the average amount of such differences in trueness (38.2μm) and precision (19.9μm) may not be clinically relevant for the fabrication of removable dentures.

Recently, a few techniques for the digital impression of edentulous jaws have been introduced, but do not cover the functional mucosa reflections. Furthermore, the reliability and reproducibility of some of these techniques are questionable.

The technique obtaining digital scans as a preliminary impression and fabricating digital occlusion rim as a custom tray could be alternative. This technique enables taking functional impression, centric relation and vertical dimension simultaneously.

Wax rim has been used to evaluate bite registration, lip support, mid line, occlusal plane, smile line and so on. As mentioned above, a specialized occlusion rim fabricated with CAD/CAM has been used to register maxillo-mandibular relations and to take a functional impression lately. This occlusion rim could be transferred in existing scan to design denture for stability and aesthetics. Milled or printed trial denture can be used for wax rim and custom tray.

The printed or milled try-in denture replaces the conventional wax tooth try-in, allowing the clinician and patient to evaluate all the same clinical parameters such as esthetics, phonetics occlusion, vertical dimension and so forth. In addition, the flange, extensions, fit and retention of the base can also be evaluated, as the printed try-in denture replicate the final denture base. After assessment of trial denture, changes can be incorporated into the definitive denture if required. 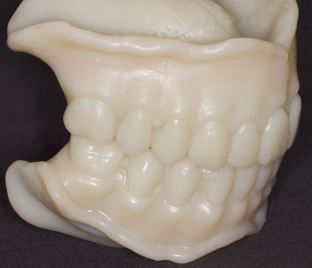 Various materials are available for manufacturing denture teeth. Essentially, the world of synthetic denture teeth can be divided into two materials: teeth made of PMMA and teeth made of composite. PMMA based materials differ regarding the structure of the PMMA matrix, which may be cross-linked or non-cross-linked. Cross-linked or highly cross-linked polymers are more resistant to certain influences, such as abrasion. PMMA teeth also differ from each other in terms of filler content – PMMA teeth can be filled or contain organic and/or inorganic fillers to improve their mechanical properties.

In contrast to the types of denture teeth listed above, composite teeth are not based on PMMA polymers. Instead, they contain a methacrylate matrix as well as a urethane dimethacrylate-based crosslinking agent and inorganic microfillers. In comparison to PMMA materials, the inorganic pyrogenic silica fillers considerably increase the hardness and rigidity.

Three conventional denture processing techniques are compression molding, pouring fluid resin and injection molding. Compression molding (pack and press) technique has been used for decades and is the most widely used technique. The fluid resin (pour) technique became popular because of decreased processing time. However, undesirable features such as denture teeth shift during processing and poor bonding between denture teeth and base have been identified by increasing the speed of processing. The injection molding technique incorporates features of both pack and press and pour processing, combining the benefits of heat processing with the decreased time of the pour technique. This technique led to increased accuracy and stability of denture bases.

Dentures undergo distortion during processing, which can be as much as 0.45% to 0.9% linear distortion. This distortion is a cause of decreased adaptation of the denture base to the mucosa.

A new technique for denture fabrication has emerged with CAD/CAM techniques. Two CAD/CAM techniques, a computerized numeric control subtractive milling process and a system of rapid prototyping (RP) that is commonly known as 3D printing, an additive manufacturing process, are available to fabricate CAD/CAM complete dentures. 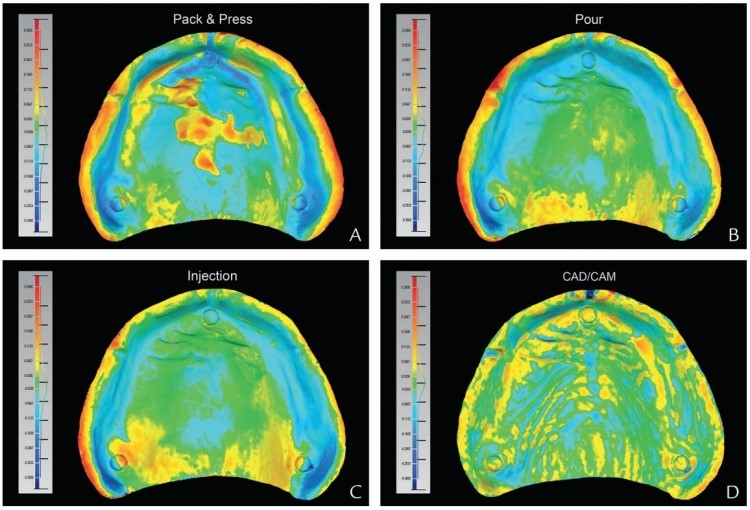 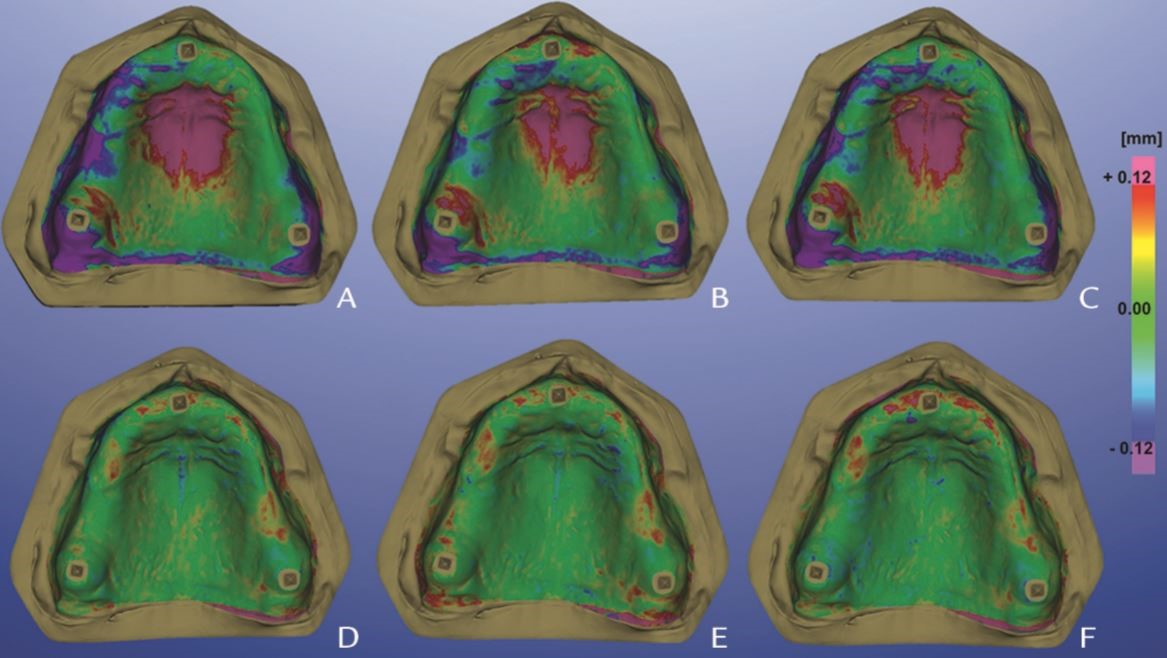 Although, both milling and printing technique use a digital 3D-image file designed by CAD software to manufacture, the two modes of fabrication are entirely different. In the milling method, the complete denture is fabricated at a milling station using a pre-polymerized PMMA puck manufactured under high pressure. The RP technique uses photosensitive liquid resins, repeatedly layered on a support structure and polymerized by an ultraviolet light source.

The latest 3D printers are using DLP technology and contraction of the material while constructing layers of minimum thickness, as well as further contraction and residual stress accumulation during the post curing process, occur during 3D printing in this technology. In addition, bond strength between printed denture base and relining material is weaker than milled base.

The claimed advantages of an additive manufacturing process include higher accuracy, less material wastage, and low infrastructure costs. However, these have not yet been scientifically proven with regard to complete denture fabrication. 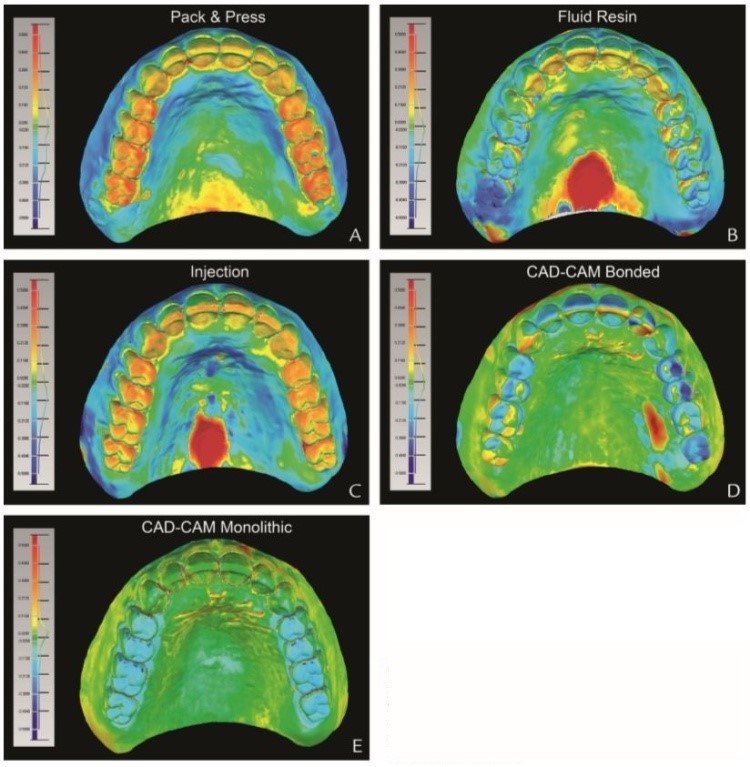 Denture teeth move during processing, with maxillary dentures distorting more than mandibular dentures. Tooth movement occurs during both the flasking and the processing stages of the pack and press fabrication technique.

A correlation between both the water to powder ratio of the investing gypsum and the amount of pressure applied during acrylic resin packing has been shown to affect the amount of denture tooth movement. Also, tooth movement during investing has been attributed to the setting expansion of the gypsum. In some separate studies demonstrated that fluid resin complete dentures underwent larger dimensional changes than pack-and-press. The injection molding technique produced a significantly smaller incisal pin opening than the standard compression molding techniques. Additionally, even minimal denture tooth movement occurring in both arches can have a significant effect on the occlusal vertical dimension.

The CAD/CAM monolithic denture demonstrated the best combination of accuracy and reproducibility, resulting in the least overall denture tooth movement.

Complete denture can be fabricated using several different processes. The goal of each technique is to produce a prosthesis that exhibits intricate mucosal adaption resulting in good retention, stability and support with minimal fabrication distortion. Today, milled or printed denture bases and teeth have been used to replace the conventional base and teeth. And the materials have different properties.

A body of scientific literature related to computer aided technology for complete dentures is emerging. Significant advancements in this technology have now resulted in their commercial availability with shorter clinical protocols. However, prospective clinical trials with true clinical endpoints are necessary to validate this technology. Both techniques still need further study for long term clinical results such as wear resistance, bond strength between denture base and teeth, and so forth. For reference, the feasible combinations of fabricating complete denture are attached. 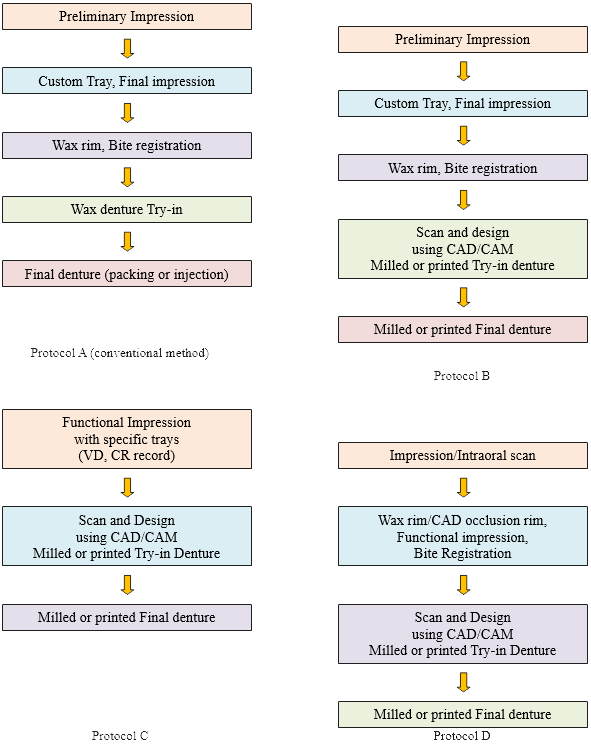 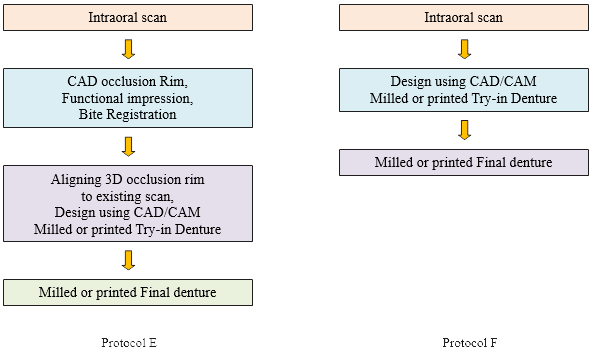 [fig.7] The feasible combinations of protocol