Polymethylmethacrylate (PMMA) was introduced in 1936. PMMA has high mechanical strength and modulus of elasticity, low water solubility, and dimensional stability. Denture resins should be biocompatible, esthetic, cleansable, and easily repairable and have adequate physical and mechanical properties. These products should have adequate strength and toughness to endure forces generated during function. High flexural strength is essential because of the uneven force distribution the base will endure under load and as the alveolar ridge irregularly resorbs. Hence, it should be able to resist plastic deformation and fatigue resistance under repeated loads.

Different categories of denture PMMA are currently available. In heat-activated resins, used in compression or injection molded methods, thermal energy activates benzoyl peroxide, which initiates the polymerization process. Alternatively, chemically activated or auto-polymerized denture base resins do not require thermal energy but instead use tertiary amines to activate benzoyl peroxide. Dentures made with auto-polymerized resins have lower mechanical properties than those made with heat-activated resins because of excess residual monomer. Although light-activated resin exhibits higher flexural strength than heat-activated PMMA, it also shows brittleness and greater variability because of the difficulty in obtaining dense specimens

CAD/CAM has a wide range of applications in dentistry due to its advanced acquisition and production capability. In recent years, CAD/CAM technology has become an alternative to conventional methods in the fabrication of complete dentures. Clinical and laboratory protocols include the combined use of manual and digital procedures.

The production of the resin disc includes high pressure and heat, resulting in a condensed acrylic resin and minimized shrinkage, porosity, or free monomer. These bases are milled from prepolymerized resin discs, which promise superior strength and fit and reduced bacterial adhesion.

The incidence of denture fracture has been reported as high as 63% in the first 3 years of service. More fractures occur in maxilla prostheses, in an approximate ratio of 2:1, than in mandibular prostheses. Clinically, maxillary dentures show higher tensile stresses in the incisor region, and midline fractures are reported as the most common fracture site.

This article has reviewed several evidence based scientific studies and discussed about the flexural strength of denture base fabricated with different technologies.

Arslan et al. evaluated the flexural strength, surface roughness, and hydrophobicity of CAD/CAM PMMA based polymers before and after thermal cycling.

In this study, the 20 specimens (in accordance with ISO 20795-1; 64×10×3.3 mm) of CAD/CAM PMMA based polymers and heat polymerized conventional PMMA were prepared. The specimens of each group were divided into two subgroups, a control and a thermo-cycled group. All specimens were immersed in water at 37℃ for 48 ± 2h prior to the thermal cycling procedure. For the determination of flexural strength, a three point bending test was conducted using a universal testing machine. After mounting the specimens in the testing device apparatus with 50 mm distance between two vertical supports, the vertical load was applied midway between the supports with a 5 mm/min crosshead speed until the specimen was fractured. 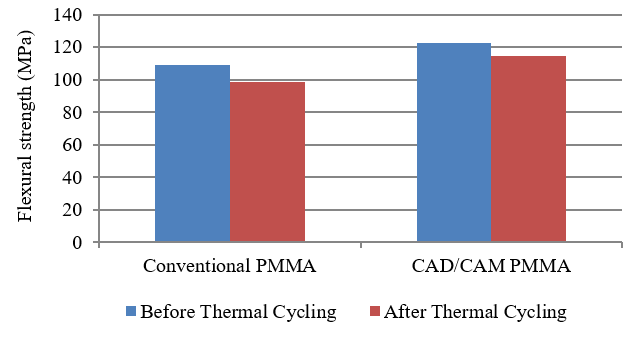 Rectangular specimens (in accordance with ISO 20795-1; 64×10×3.3 mm) of denture base materials were fabricated. The rectangular specimens were standardized for finishing and polishing treatment and completed by 1 operator. After surface treatment, the specimens were stored in distilled water at 37 ± 1 ℃ for 1 week before testing. Flexural strength and flexural modulus were obtained from a bench 3-point bend test by using a universal testing machine with a span length of 50 mm and a crosshead speed of 5 mm/min.

The flexural strength and flexural modulus of the 3 tested groups are listed in the table. The milled and compression groups fractured, showing minimal-to-no plastic deformation. In contrast, the injection group displayed pronounced deformation.

Flexural strength is one of the major determinants of the mechanical properties of acrylic resin and is affected by the degree of polymerization achieved. When acrylic resin strengths are compared, those with a lower degree of conversion exhibit inferior mechanical properties. The higher flexural strength values of CAD-CAM specimens may be attributed to a higher degree of conversion. The CAD-CAM resins are milled from solid, prepolymerized discs, and it is reasonable to assume that the discs are polymerized by using equipment capable of providing greater polymerization potential than available with conventional processing methods. In this study, the compression molded group showed higher flexural strength than others.

Pripic et al. compared the mechanical properties of CAD/CAM, 3D printed, and conventional denture base materials. Three heat-polymerized acrylics, three types of CAD/CAM materials, one type of resin for 3D printing, and one polyamide material were selected for denture base fabrication.

Conclusion
The studies had two major limitations. First, oral conditions were absent in the present research, and second, different testing conditions (dry vs. wet) were not included. Both may have affected the results. However, based on the findings of these in vitro studies, the following conclusions were drawn.